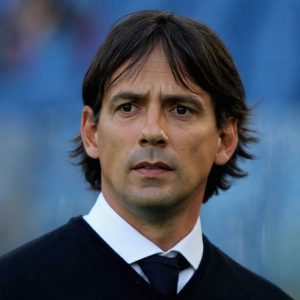 Simone Inzaghi (born 5 April 1976) is an Italian professional football manager and former player. He is currently managing in Serie A at Lazio.

The younger brother of Filippo Inzaghi, Simone played as a striker for a host of clubs during his professional career, including Piacenza and Lazio; he remained for more than a decade at the Roman club, winning major honours including the Double, but also spending time on the bench and being sent on loan spells. He earned three caps for Italy, during as many years.

Following his retirement from playing, he embarked on a managerial career, initially in Lazio’s youth teams before taking charge of the senior side in 2016 and guiding them to the Coppa Italia and the Supercoppa Italiana twice. As a manager, Inzaghi is known for employing the 3–5–2 formation, being one of several Italian coaches that have led a notable revival of this tactical system.

Following his retirement, Inzaghi remained with Lazio, managing its Allievi and Primavera sides. On 3 April 2016, he was appointed at the senior team on an interim basis following the sacking of Stefano Pioli.

For the 2016–17 season, Inzaghi was originally replaced by Marcelo Bielsa. However, as the Argentine left his post after less than one week due to undisclosed reasons, he was named as permanent manager. He guided the team to fifth place in the domestic league as well as the final of the Italian Cup, lost to Juventus; on 7 June 2017, he renewed his contract until 2020.

The 2017–18 campaign started with a high note, as Lazio defeated Juventus in the Supercoppa Italiana with a 3–2 result. They again finished fifth in Serie A, missing out on Champions League qualification on the final matchday after a 2–3 home loss to Inter Milan.

The 2018–19 season saw the side win the domestic cup 2–0 over Atalanta, conquering their seventh title overall and automatically qualifying for the group stage of the UEFA Europa League.

On 22 December 2019, Inzaghi captured his second Supercoppa Italiana title with Lazio, following a 3–1 victory over Juventus.