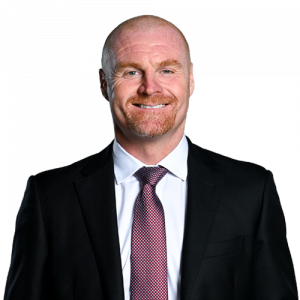 Sean Mark Dyche (born 28 June 1971) is an English professional football manager and former player who is the manager of Premier League club Burnley.

During his playing career, Dyche played as a centre back, making his professional debut in 1990 and representing Chesterfield – whom he captained and scored for in an FA Cup semi-final – Bristol City, Luton Town, Millwall, Watford and Northampton Town. He was promoted with three of his six clubs. After retiring as a player in 2007, he coached at Watford, including a stint as manager between June 2011 and July 2012.

Since being appointed manager at Burnley in October 2012, Dyche has guided the club to two promotions to the Premier League in three seasons, the latter following relegation back to the Championship at the end of 2014–15.