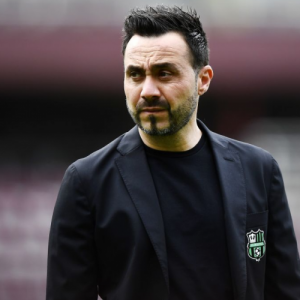 De Zerbi started his professional career at A.C. Milan. He spent four seasons on loan to lower divisions clubs (Serie B to Serie C2). He spent 1999–2000 Serie C1 season in Como along with Alberto Comazzi and Luca Saudati of Milan. Half of the registration rights also sold to Salernitana in 2000–01 and 2001–02 season. In June 2002 Milan bought back De Zerbi from Salernitana and sold De Zerbi to U.S. Foggia.

He made his debut in the Serie A with Napoli, which the team signed him from Calcio Catania for €2.5 million.[2] On 8 February 2010, Napoli announced the loan transfer of 30-year-old attacking midfielder to CFR Cluj, and on 31 August 2010 he signed with the Liga 1 champions for three years.

After the end of his contract with CFR Cluj, De Zerbi signed for amateurs Trento on a six-month contract in January 2013, and retired for good at the end of the season.

In July 2014 he accepted an offer to become new head coach of his former club Foggia in the Lega Pro league, with whom he won a Coppa Italia Lega Pro in 2016 and narrowly missed promotion after a 5–3 aggregate loss to Pisa in the playoff finals. He was successively confirmed, after allegedly turning down an offer from Serie A’s F.C. Crotone during the summer, only to be removed as a manager in August 2016 due to disagreements with the board regarding the transfer strategy of the club.

On 6 September 2016, De Zerbi was named new head coach of Serie A club Palermo following Davide Ballardini’s departure by mutual consent due to disagreements with the board. His stint at the helm of the Sicilians however turned out to be negative, with seven consecutive defeats and no single points at home in three months. After a shocking penalty shootout elimination in a home match against Serie B club Spezia, he was then ultimately sacked on 30 November 2016 and replaced with former team captain Eugenio Corini.