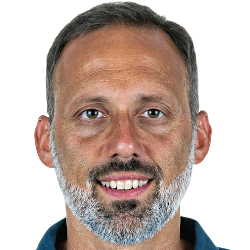 He was previously a youth coach of 1. FC Nürnberg and 1899 Hoffenheim. On December 30, 2019, Matarazzo was appointed head coach of VfB Stuttgart. Since 2000, he has lived in Germany.The mathematician Matarazzo decided to go for football instead of working for an investment bank. After failed tries at Serie B club Salernitana based in his mothers hometown Salerno and Serie C club Juve Stabia in Italy, he instead signed in Germany’s fourth division with Eintracht Bad Kreuznach. 2001–2003 and 2004/2005 he played for Wehen, where he met his wife, Daniela. He played as well for Münster and Wattenscheid. Later, in the Nürnberg farm team in the German regional league Matarazzo was playing and assistant coach at the same time.

His son Leopoldo was born in Nürnberg, and Matarazzo worked many years at the Clubs academy, coaching the B and A juniors. 2015 Matarazzo started the German coaching training at the Hennes Weisweiler Akademie, where he shared a room with Julian Nagelsmann. Matarazzo joined Nagelsmann 2017 in Hoffenheim, becoming youth coach there. 2018 Matarazzo became Nagelsmann’s assistant and interfaced between the first team and academy, and stayed there with Alfred Schreuder as head coach. In December 2019 Sven Mislintat signed Matarazzo as first team coach of VfB Stuttgart.