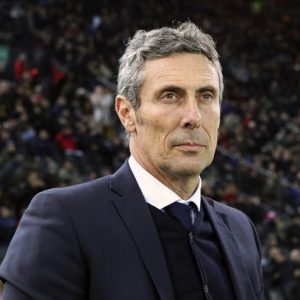 Luca Gotti (born 13 September 1967) is an Italian professional football manager and former player who is the head coach of Serie A club Udinese.

Born in Adria, Rovigo, Gotti played as a midfielder for amateur clubs such as Contarina, San Donà and Caerano in the lower divisions of Italy. He achieved promotions twice during his career, with Contarina to Eccellenza after winning the 1989–90 edition of the Promozione and with San Donà to Serie C in the 1993–94 Campionato Nazionale Dilettanti season.

Gotti began his managerial career in 1998 as part of the youth system staff of A.C. Milan. In 1999, he took over his first role as head coach, at the helm of Promozione amateurs Montebelluna. Gotti later served two more amateur clubs, Pievigina and Bassano Virtus in Serie D, before joining Reggina as a youth coach in 2004 and remaining there until 2006.

Gotti then served as head coach of Serie B side Treviso from 21 July 2008 to 24 February 2009, and again from 19 March to 25 June 2009, he oversaw the club’s relegation by the end of the season. Gotti successively served as head coach of Triestina for a short period. However, due to poor results, Gotti was dismissed on 6 October 2009.

In December 2010, Gotti was named Roberto Donadoni’s assistant at Serie A team Cagliari, then following the manager also during his stints at Parma and Bologna. He then served as Maurizio Sarri’s assistant at Chelsea during the 2018–19 season.

After Sarri’s departure to Juventus, Gotti accepted an offer from Udinese to become Igor Tudor’s assistant manager in July 2019. When Tudor was removed from his managerial duties, Gotti was named as caretaker manager of Udinese on 1 November 2019. He won his first game in charge two days later as Serie A manager with 3–1 over Genoa, later explicitly stating his lack of interest in taking over as permanent manager. However, he completed the season as head coach of Udinese, obtaining comfortable safety, and being successively confirmed for the 2020–21 Serie A campaign.