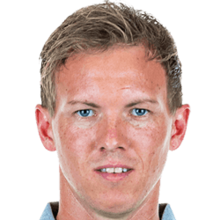 Julian Nagelsmann (born 23 July 1987) is a German professional football coach who is the manager of Bundesliga club RB Leipzig.
On 21 June 2019, RB Leipzig announced that Nagelsmann would be their manager from the 2019–20 season and signed a four-year contract which would expire in 2023. Nagelsmann won his first Bundesliga match as RB Leipzig manager against FC Union Berlin 4–0, he also led Leipzig to a 1–1 draw against FC Bayern Munich. On match-day 10 Leipzig won against Mainz 8–0. Nagelsmann faced his former club Hoffenheim on match-day 14 and won 3–1 against them.