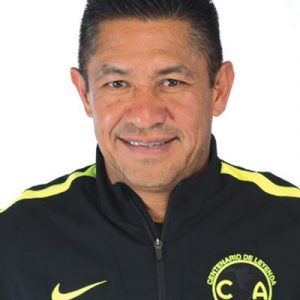 Following his retirement from the playing field, Ambríz began his coaching career in 2002 with the Mexico national team, where he was the assistant to Javier Aguirre, taking part in the 2002 FIFA World Cup. Following his participation with the national team, he joined Puebla, managing only seven matches. In 2003, he was once again the assistant to Javier Aguirre at Spanish clubs Osasuna and Atlético de Madrid. They parted company when Aguirre was sacked from the Madrid position in 2009. He also had spells with San Luis – from 2009 to 2011 – and Guadalajara in 2012, only in charge for twelve matches.

On 4 February 2013 Adolfo Ríos, President of Querétaro, announced Ambríz as their new manager after the club sacked Sergio Bueno after a 3–0 loss to Club América at Estadio Azteca. He managed the club up until February 2015, where Ambríz was sacked after a string of bad results during the Clausura tournament.

On 26 May 2015, Ambríz was confirmed as the new manager at Club América, signing a two-year contract. He led América to a disappointing run at the FIFA Club World Cup, losing the quarter-final match to Chinese team Guangzhou Evergrande, and defeating Congolese club TP Mazembe to claim a fifth place finish in the competition. The following year, Ambríz led América to the CONCACAF Champions League finals, defeating Tigres UANL 4–1 on aggregate, thus earning their qualification to the 2016 FIFA Club World Cup. In September, he was ranked as the 10th best coach according to Football Coach World Ranking. On 17 September, after suffering a 2–0 home defeat to León, Ambríz was sacked as manager the following day.

In August 2017, Ambríz was appointed manager of Necaxa, staying with the club for a year; he won the Clausura 2018 Copa MX with Necaxa, beating Toluca 1–0 in the final to end a 19 year trophy-less drought for the club.

On 18 September 2018, Ambríz was named manager of Club León, replacing Gustavo Díaz. During the 2019 Clausura, he helped León attain the records of most consecutive wins with eleven and the most points attained during the current 17-match tournament format with 41 points and a first place finish. They faced Tigres UANL in the Clausura championship final but lost following an aggregate score of 1–0. Despite the loss, his feats with the club contributed to him being named best manager at the conclusion of the season. After a first place finish in the Guardianes 2020 general table, on 13 December, León won the league title defeating Club Universidad Nacional with an aggregate score of 3–1, becoming Mexico’s joint fourth most successful team with eight titles in total alongside Cruz Azul.