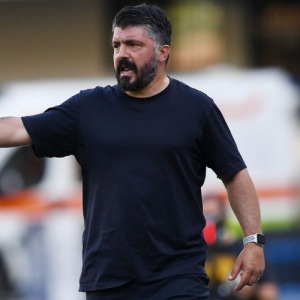 As a player, he mainly played in the centre as a defensive midfielder, although he was also capable of playing on the wing. He initially played for Perugia, Salernitana, and Rangers, though he is mostly remembered for his time with Milan in Serie A, where he won the Champions League, in 2002–03 and 2006–07, the Coppa Italia in 2002–03, and also the Serie A title in 2003–04 and 2010–11. In addition to these titles, he won two Italian Supercups, two UEFA Supercups, and a FIFA Club World Cup. At international level, he represented the Italy national football team at the 2000 Summer Olympics, three FIFA World Cups, two UEFA European Championships, and the 2009 FIFA Confederations Cup.

Gattuso’s talismanic midfield partnership with playmaker Andrea Pirlo, both at club and international level, played a key role in Italy’s World Cup victory in 2006, as well as Milan’s domestic, European, and international successes during the mid-2000s. Despite not being blessed with notable technical skills, Gattuso’s pace, strength, and work-rate complemented and supported Pirlo’s composed, creative playing style, while his energy, aggression, and hard-tackling style of play enabled him to make a name for himself as one of the best players in the world in his position. In addition to his ball-winning abilities, Gattuso was renowned for his competitive nature and leadership qualities throughout his career, often wearing the captain’s armband for Milan following Paolo Maldini’s retirement.

Gattuso’s managerial career began as player-manager of his final club, Sion of the Swiss Super League, and he also had short spells in charge of Palermo and OFI Crete. In June 2016, he led Pisa to Serie B promotion. He later coached both the youth side and the first team of his former club Milan between 2017 and 2019, before being appointed as manager of Napoli later that year, with whom he won his first title as a coach, the 2019–20 Coppa Italia.