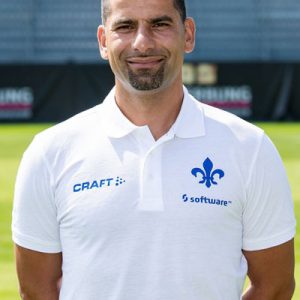 Dimitrios Grammozis (born 8 July 1978) is a Greek former professional footballer who played as a midfielder and current manager who coaches Schalke 04. During his playing years, he was known as a versatile defender and defensive midfielder.

Grammozis was born to Greek parents in Wuppertal and grew up in Velbert. He began his football career in 1984 with local side TuS Neviges in the Velbert neighborhood district. After four years, in 1988, Grammozis moved to SSVg Velbert, where he played for three years. His next and final stop in Velbert was a two-year stint at Borussia Velbert. In 1992, Grammozis returned to his hometown. After a year in the youth teams of Wuppertaler SV, he moved in 1994 to KFC Uerdingen 05, where he played two more years in the A-youth. In 1996, aged 18, Grammozis played his first senior season in the 2. Bundesliga with KFC Uerdingen. In 1998, after another season in the 2. Bundesliga, he was transferred to Bundesliga side Hamburger SV for €350,000.

Grammozis spent two years with Hamburger SV, contributing to a third-place 1999–2000 Bundesliga finish and subsequent qualification to the Champions League. However, he did not manage to permanently assert himself as a regular, and in addition to the arrival of quality players, Grammozis moved to 1. FC Kaiserslautern in 2000. He spent five years with The Red Devils, characterized by injury problems and difficulties with his coaches, especially in his last two seasons.

In June 2007 Grammozis left Germany and moved to Super League Greece side Ergotelis, signing a one-year contract with an option for another year. After a successful 2007–08 season with Ergotelis in which he played in 23 games and scored once, the club opted to extend his contract. However, after falling out with coach Nikos Karageorgiou in November 2008, Grammozis was transferred out to Cypriot First Division side Omonia Nicosia in December for a reported €150,000. He spent 2.5 years at Omonia, where he became Cypriot champion in 2010, and won the Cypriot Super Cup against Apollon Limassol.

In January 2011, Grammozis returned to the Super League Greece and joined newly promoted side AO Kerkyra. In the summer of 2012, he moved to VfL Bochum II, signing for two years, but ended up retiring his career at the end of the 2012–13 Regionalliga, having played in 26 games.