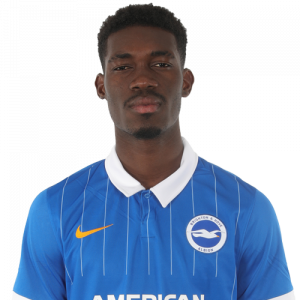 Yves Bissouma (born 30 August 1996) is a Malian professional footballer who plays as a midfielder for club Brighton&Hove Albion and Mali national team.

On 17 July 2018, Bissouma transferred to English side Brighton & Hove Albion for an undisclosed fee, signing a five-year contract with the club. Bissouma made his debut for the Sussex club on the opening day of the 2018–19 Premier League season in a 2–0 away loss to Watford where he came on as a substitute. He made his first start in Brighton’s third match of the season where they lost 1–0 away at Liverpool. Despite the defeat Brighton were praised for their defending and closing Liverpool down. On 5 January 2019 Bissouma scored his first Albion goal on his FA Cup debut in a 3–1 away win against south coast rivals Bournemouth in the third round.

Bissouma’s first game of the 2019–20 season came on 21 September away against Newcastle where he came on as a substitute in the 0–0 draw. He scored his first ever Premier League goal on the last day of the season with a long-range shot in a 2–1 away win against Burnley.

Bissouma was given a straight red card late on in Brighton’s 3–0 away victory over Newcastle in their second league match of the 2020–21 season for catching Jamal Lewis in the face with his boot. After missing the Manchester United tie due to suspension he started and scored his first goal of the season in the next fixture, a 4–2 away defeat against Everton on 3 October. On 23 January 2021, in a foruth round FA Cup tie, Bissouma scored a 30 yard stunner putting Brighton ahead in a eventual 2–1 home win against Blackpool to progress to the next round. Bissouma played in Brighton’s 1–0 away victory over defending champions Liverpool on 3 February claiming their first league win at Anfield since 1982.