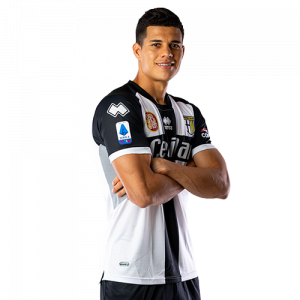 Yordan Hernando Osorio Paredes (born 10 May 1994) is a Venezuelan professional footballer who plays as a defender for Serie A club Parma and the Venezuela national team.

Born in Barinas, Osorio began his career at hometown club Zamora F.C. in the Venezuelan Primera División, where he won three league titles. In January 2017, he joined C.D. Tondela in Portugal’s Primeira Liga on a contract lasting until 2021.

On 31 January 2018, Osorio moved to league leaders FC Porto on loan for the remainder of the season with an option to buy. He made only one appearance as the Dragons won the title, a 2–0 loss at C.F. Os Belenenses on 2 April, starting in place of the suspended Iván Marcano; a communication error with his defensive partner Felipe led to the first goal.

Having signed a Porto contract lasting until 2022, Osorio moved on loan to Vitória S.C. on 5 July 2018 for the season. He played 30 total matches for the team from Guimarães and scored twice, including one on 19 May 2019 on the final day of the season to win 3–1 at neighbours Moreirense F.C. to seal fifth place, qualifying for the UEFA Europa League at their expense.

On 31 August 2019, Osorio was loaned to FC Zenit Saint Petersburg for the season, with the option to buy. He made his debut on 17 September in the UEFA Champions League opening group game away to Olympique Lyonnais, a 1–1 draw.

Osorio left Porto on 5 October 2020, when he joined Italy’s Parma Calcio 1913 on a four-year deal for an estimated fee of €4 million.