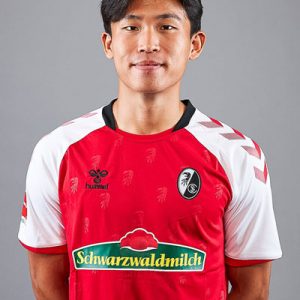 Jeong Woo-yeong (born 20 September 1999) is a South Korean professional footballer who plays for Bundesliga side SC Freiburg as a forward or an attacking midfielder.

Club career
On 30 June 2017, Jeong signed for Bayern Munich from South Korean club Incheon United. The contract runs until 30 June 2022. Jeong officially joined Bayern on 1 January 2018. Jeong made his first team debut for Bayern Munich in the UEFA Champions League on 27 November 2018, coming on as a substitute in the 81st minute for Thomas Müller against Benfica. On 3 May 2019, he started as right winger and won the final of the season’s Premier League International Cup for Bayern Munich’s under-23 team, earning the first club international trophy of his career. He was substituted by Jannik Rochelt in the 68th minute.

On 19 June 2019, SC Freiburg announced the signing of Jeong on a four-year deal with the option for Bayern Munich to buy him back. On 10 August 2019, he made his Freiburg debut against Magdeburg in the 2019–20 DFB-Pokal. However, he didn’t appear in the field after his debut, and returned to Bayern on a loan deal. He contributed to a 3. Liga title of reserve team by showing outstanding performances with one goal and eight assists in 15 games.

On 12 December 2020 Jeong scored his first Bundesliga goal against Arminia Bielefeld after replacing Vincenzo Grifo in the 86th minute.