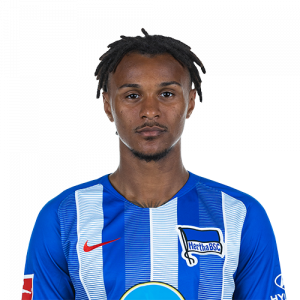 Valentino Lando Lazaro (born 24 March 1996) is an Austrian professional footballer who plays as a right midfielder for Borussia Mönchengladbach, on loan from Inter Milan, and the Austria national team.

Lazaro was born in Graz, Austria, to an Angolan father and a Greek mother. He made his full debut for Red Bull Salzburg on 3 November 2012 against Admira Wacker in the league. At 16 years and 224 days, he became the youngest player ever in the history of the Austrian Bundesliga.

Lazaro’s loan deal from Red Bull Salzburg to Hertha BSC was made permanent in 2017, when he was signed on a long term deal at the Bundesliga club. He scored his first goal for Hertha BSC in a 2–0 away win against Bayer Leverkusen on 10 February 2018.

Loan to Newcastle United
On 24 January 2020, Lazaro joined Newcastle United on loan for the remainder of the 2019–20 season and was handed the number 23 shirt. He scored his first Newcastle goal in a 3–2 win over West Bromwich Albion to secure a spot in the quarter-finals of the FA Cup. On 1 July, Lazaro scored his first goal in the Premier League for the club in a 4–1 win over Bournemouth.