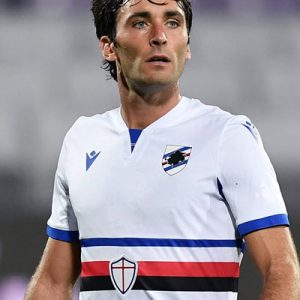 Tommaso Augello (born 30 August 1994) is an Italian professional footballer who plays as a defender for Serie A club Sampdoria.

Growing up in the Milanese amateur team of Cimiano,  in 2011 he moved to Pontisola, with whom he played three seasons in Serie D, immediately establishing himself as a holder in the role.  In 2014 he passed to Giana Erminio,  with whom he remained until 24 July 2017, the day on which he was purchased by La Spezia. After a first season in which he played little, in the second the Ligurians showed themselves as one of the best players in the Ligurian league.

Sampdoria
On 9 July 2019 he was loaned to Sampdoria with obligation of redemption, signing a four-year contract with the Sampdoria. He made his Serie A debut (as well as with the Genoese club) on 4 November 2019 on the occasion of Sampdoria’s victory over SPAL, replacing Jakub Jankto. In the second part of the season he finds more space coming to alternate with Nicola Murru.

The following year, with the sale of Nicola Murru, he became the owner on the left wing, reaching his first goal in the top flight on 17 October 2020 in the 3-0 win over Lazio. Following the good performances offered, the following 29 December renews his contract with the Dorians until 2025.

National
In October 2020, given the good performance offered with Sampdoria, he is viewed by the national team.