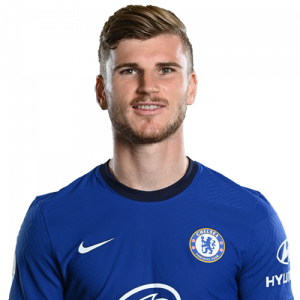 Timo Werner (born 6 March 1996) is a German professional footballer who plays as a forward for Premier League club Chelsea and the Germany national team.

Werner began his senior club career in 2013 playing for VfB Stuttgart, becoming the club’s youngest debutant and youngest ever goalscorer. He signed with RB Leipzig in 2016, aged 20, in a then club record transfer worth €10 million, where he set the record as the youngest player to reach 150 and 200 appearances in the Bundesliga. Werner also finished as the league’s second highest goalscorer in the 2019–20 season. In 2020, Werner was the subject of a record association football transfer when he signed for Chelsea in a transfer worth £47.5 million (€50 million), making him the then-most expensive German player of all time.

A German international, Werner was a prolific goalscorer at youth international level for Germany, scoring 34 goals in 48 appearances across the various age group levels. Werner made his senior debut in 2017 and helped Germany win the 2017 FIFA Confederations Cup, winning the Golden Boot as the tournament’s highest goalscorer. He also represented Germany at the 2018 FIFA World Cup.