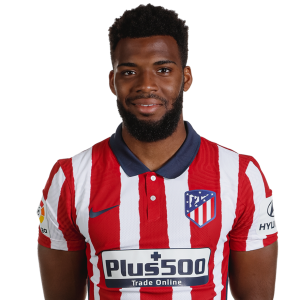 Thomas Benoît Lemar (born 12 November 1995) is a French professional footballer who plays as a midfielder for Spanish club Atlético Madrid and the France national team.

He is known for his versatility, being able to play on both wings and through the centre. Features of his game include dribbling and passing ability.

Lemar began his senior career at Caen in 2013. He played 32 times for the club, before moving to Monaco for £3.4 million in 2015. In 2018, he signed for Spanish club Atlético Madrid, where he won the UEFA Super Cup in his debut season.

Lemar represented France at every level from U17 to U21, and made his international senior debut in 2016 against the Ivory Coast. He was a member of the team that won the 2018 FIFA World Cup.

Atlético Madrid
On 18 June 2018, La Liga club Atlético Madrid confirmed that a preliminary agreement had been reached with Monaco for the transfer of Lemar. On 27 July 2018, Lemar successfully passed his medical, officially joining Atlético Madrid for a reported fee of €70 million.

On 22 September 2018, Lemar scored his first league goal for Atletico Madrid against Getafe in a 2–0 away win, where he also hit the shot that resulted in an own goal for Getafe keeper David Soria. He ended the 2018–19 season with just three goals in all competitions.

In the 2019–20 season, Lemar featured in 29 matches in all competitions, yet he finished the season with no goals and no assists.

On 5 December 2020, Lemar scored his side’s opening goal against Valladolid in a 2–0 win, ending a run of 45 matches at club level without scoring dating back to April 2019.