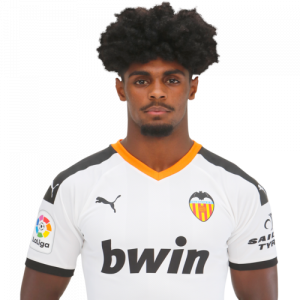 Thierry Rendall Correia (born 9 March 1999) is a Portuguese professional footballer who plays as a right back for Spanish club Valencia CF.

Sporting CP
Born in Amadora, Lisbon metropolitan area of Cape Verdean descent, Correia joined Sporting CP’s academy at the age of 10. He spent the better part of his first year as a senior with their under-23 team.

Correia made his competitive debut for the main squad on 29 November 2018, coming on as a late substitute for Bruno Gaspar in a 6–1 away win against Qarabağ FK in the group stage of the UEFA Europa League. His first start was the following 4 August, in the 0–5 loss to S.L. Benfica in the Supertaça Cândido de Oliveira.

On 11 August 2019, Correia played his first match in the Primeira Liga, featuring the entire 1–1 draw at C.S. Marítimo.

Valencia
On 2 September 2019, Correia signed a five-year contract with Valencia CF for a €12 million transfer fee. He made his Spanish La Liga debut later that month, playing the full 90 minutes in a 3–3 home draw against Getafe CF.

Correia scored his first goal as a senior on 7 January 2021, closing a 4–1 away victory over Yeclano Deportivo in the second round of the Copa del Rey.