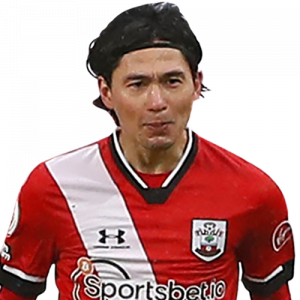 Takumi Minamino (born 16 January 1995) is a Japanese professional footballer who plays as an attacking midfielder or winger for Premier League club Southampton, on loan from Liverpool, and the Japan national team.

Minamino began his club career at J.League Division 1 club Cerezo Osaka in 2012 and in his first season he was named J.League Rookie of the Year. In 2014 he moved to Austrian club Red Bull Salzburg with whom he spent four successful seasons. Following impressive displays for the club he joined Liverpool on 1 January 2020, winning the Premier League in his inaugural season.

Making his senior international debut for Japan in 2015, Minamino starred in the team that reached the final of the 2019 AFC Asian Cup.

On 1 February 2021, Minamino signed for Southampton on loan for the remainder of the 2020–21 season. Five days later, Minamino scored on his debut for the Saints in a 2–3 away league defeat by Newcastle United. He scored again in his next game, opening the scoring in a 1–1 draw with Chelsea.