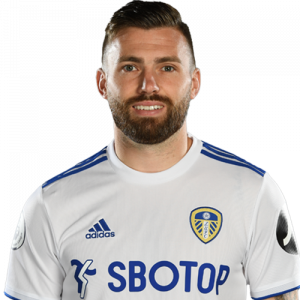 Stuart Dallas (born 19 April 1991) is a Northern Irish professional footballer who plays for Premier League club Leeds United and the Northern Ireland national team. A versatile player, most of his career appearances have been as a winger but in recent seasons he has played more often in midfield and at full-back. He was a key part of the Leeds United team under Marcelo Bielsa that won the 2019-20 EFL Championship and promotion to the premier league.

Since 2015 Dallas has become a regular for Northern Ireland, earning 45 caps and played at UEFA Euro 2016.

In August 2015, Dallas joined Leeds United on a three-year deal for an undisclosed fee, reported to be in the region of £1.3 million. He made his debut for Leeds in the Football League Championship in a 1–1 draw against Burnley on the opening day of the season, and scored his first goal for the club against Wolverhampton Wanderers on 17 December 2015. After making 49 appearances, more than any other player in the squad, he was named Leeds’ ‘Players’ Player Of The Year’ for 2015–16.

After missing the majority of pre-season training due to his participation in UEFA Euro 2016 with Northern Ireland, Dallas then had an injury hit start to the season, missing five weeks after suffering a calf strain. He returned in November 2016, and went on to make 31 appearances that season. In August 2017, Dallas signed a new three-year contract at the club keeping him at Leeds until the 2019–20 season.

Due to injuries to several fullback, including Luke Ayling and Laurens De Bock, Dallas found himself used as a right-back for periods during the 2017–18 season.

During the 2018–19 season, Dallas found himself also playing in several positions under new head coach Marcelo Bielsa before long-term injuries to Luke Ayling and Gaetano Berardi meant Dallas had an extended run in the side as right-back. He scored his first goal of the season on 27 November in a 1–0 win against Reading. However, on 1 December, Dallas broke his foot after picking up the injury in a 1–0 win against Sheffield United. The injury ruled him out for several weeks. However, after his return to training, Dallas was ruled out for another 6 weeks after picking up another injury in January 2019.

During the 2018–19 season, Dallas played 29 games in all competitions, scoring 4 goals. After Leeds finished the regular season in third place, they qualified for the play-offs. Dallas started both legs of the Championship play-off semi-final against Derby County at left-back, following his return from injury, due to injuries to Barry Douglas, Gjanni Alioski and Leif Davis. Leeds won the first leg of the play-off semi-final, a 1–0 win at Pride Park, but despite two goals from Dallas, Leeds lost the reverse leg 4–2 at Elland Road, seeing Derby progress to the final against Aston Villa.

In June 2019, teammate Bailey Peacock-Farrell revealed he and Dallas turned down the option of starting pre-season training a week later after featuring on international duty for Northern Ireland over the summer, in order to fight for a starting spot.

Dallas found himself one of the first names on the first team sheet, being ever present for the first half of the season, with Dallas playing in a range of positions, including left-back, right-back and central midfield after injuries to Adam Forshaw, Jamie Shackleton, Tyler Roberts and Pablo Hernández.

After the English professional football season was paused in March 2020 due to Impact of the COVID-19 pandemic on association football, the season was resumed during June, where Dallas earned promotion with Leeds to the Premier League and also become the EFL Championship champions for the 2019–20 season in July after the successful resumption of the season.

Dallas won Leeds’ Players Player of the season award at the clubs end of season awards on 24 July 2020.

Dallas made his Premier League debut in the first match of the season against Liverpool on 12 September 2020, starting in the 4–3 defeat at Anfield to the reigning champions.

On 2 November 2020, He scored his first premier league goal in a 1-4 home loss against Leicester. On 22nd November 2020, Dallas made his 200th appearance for Leeds, joining a select group of just under 70 players that have made over 200 appearances for the club.

On 16 December 2020, Dallas scored in the 77th minute as Leeds thrashed Newcastle United 5-2 at Elland Road. He scored again in a Premier League game for Leeds against Leicester, in which the Whites triumphed 3-1.