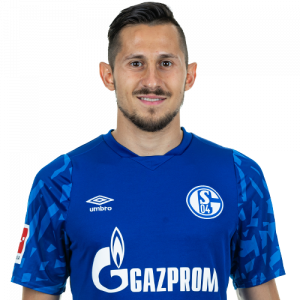 Steven Skrzybski (born 18 November 1992) is a German footballer who plays for Schalke 04.

Early career
The German, born in the capital Berlin, began playing at youth level from a very young age. He started at just eight years old with local team SG Stern Kaulsdorf before quickly being spotted as a potential star by professional club Union Berlin.

Union Berlin
Skrzybski played 143 official games for Union from 2010 to 2018. Having risen through the various youth ranks at the club, he broke into the reserve team and was also considered to be first team quality. After mostly playing with the reserves for a few years the striker began life at full professional level and made a name for himself in the 2016–17 season, when he played in 32 matches and scored 9 times. He scored 14 goals in the 2017–18 season.

Schalke 04
On 29 May 2018, Schalke announced that Skrzybski signed for the club on a three-year deal. On 24 November 2018, he scored his first two goals for Schalke against 1. FC Nürnberg in a 5–2 victory.