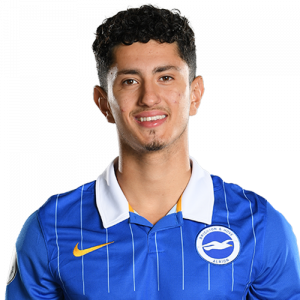 Steven Alzate (born 8 September 1998) is a British-Colombian professional footballer who plays as a midfielder for Premier League club Brighton & Hove Albion and the Colombian nation team.

On 31 July 2017, Alzate signed for Brighton & Hove Albion for an undisclosed fee. Alzate made his debut for The Seagulls in the EFL Cup on 27 August 2019 where he played the full match in the 2–1 away win against Bristol Rovers. Alzate was named on the bench in a Premier League fixture for the first time in a 1–1 home draw against Burnley on 14 September. He remained an unused substitute. Alzate made his Premier League and league debut for Brighton on 21 September playing the full match in the 0–0 draw at Newcastle. He made his home debut on 5 October where he started the match against Tottenham Hotspur, which ended in a 3–0 victory.

Alzate scored his first Albion goal on 23 January 2021, deflecting a Alexis Mac Allister shot in the back of the net in a 2–1 home victory over Blackpool in the FA Cup fourth round, a match where he also recorded an assist for Yves Bissouma’s 30 yard stunner. On 3 February 2021, Alzate scored his first Premier League goal to secure a 1–0 away win over Liverpool, sealing Brighton’s first win at Anfield in Premier League history and their first league win at Liverpool since 1982.

On 6 November 2019, Alzate received his first call-up to the Colombia national team for friendlies against Peru and Ecuador in November 2019. He made his debut on 16 November coming on as a substitute in a 1–0 home victory over Peru. 5 days later he made his first start for Colombia in the 1–0 away win against Ecuador where he was highly praised by manager Carlos Queiroz.