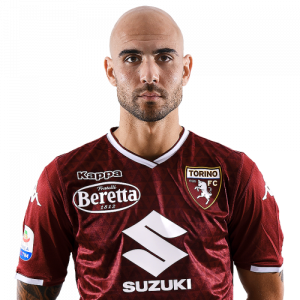 Simone Zaza (born 25 June 1991) is an Italian professional footballer who plays as a striker for Torino and the Italian national team.

Zaza began his professional club career with Atalanta in 2008, where he remained for two seasons. In 2010, he moved to Sampdoria, where he was sent on loan spells to Juve Stabia, Viareggio and Ascoli. In 2013, he joined Sassuolo, and in 2015, Juventus. In his first season with the latter club, he immediately won a domestic double. At international level, Zaza made his senior debut for Italy in 2014, and went on to represent his nation at UEFA Euro 2016.

Torino
On 17 August 2018, he was loaned to Torino for €2 million, with a €12 million obligation to buy at the end of the season. In the first game of new manager Davide Nicola, he scored two second-half goals to help Torino draw 2–2, having been two goals down at half-time.