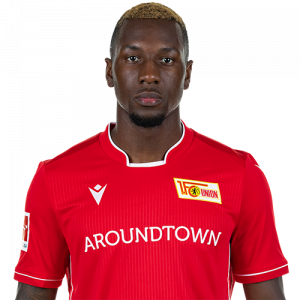 Sheraldo Becker (born 9 February 1995) is a Dutch professional footballer of Surinamese descent who plays as a winger for Union Berlin in the Bundesliga. Besides the Netherlands, he has played in Germany.

Ajax
Becker was discovered during a talent day and was recruited to the Ajax Youth Academy in 2004. On 6 June 2011, it was announced that Becker had signed his first professional contract with the club until 30 June 2014.

Becker began the 2013–14 season playing for the A1 under-19 squad where he made five appearances in the group stage of the UEFA Youth League.[4] On 14 October 2013, he made his professional debut for the reserves team Jong Ajax in a 3–0 home defeat to Fortuna Sittard in the Eerste Divisie. On 28 February 2014, Becker scored his first professional goal against Den Bosch. On 8 May 2014, he was called up to the first team by manager Frank de Boer for two friendly matches against Persija Jakarta and Persib Bandung in Indonesia., playing in the 3–0 win over Persija on 12 May 2014.

PEC Zwolle (loan)
On 4 January 2015, it was announced that Becker was sent on loan to PEC Zwolle until the end of the season.