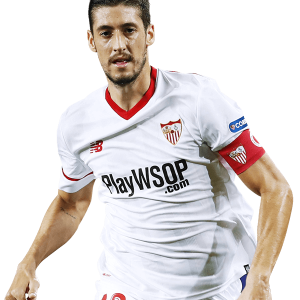 Sergio Escudero Palomo (born 2 September 1989) is a Spanish professional footballer who plays for Sevilla FC as a left-back.

Sevilla
On 3 July 2015, Escudero moved to fellow league team Sevilla after agreeing to a four-year deal. He netted his first goal for the Andalusians on 29 November, the only in a league fixture against Valencia CF at the Ramón Sánchez Pizjuán Stadium.

Escudero played second-fiddle to renoît Trémoulinas in his first year, but still managed to play 28 matches in all competitions, including the full 90 minutes of the final of the UEFA Europa League against Liverpool in Basel (3–1 win).

In February 2017, Escudero extended his contract until 2021. In 2019–20 his position was usurped by on-loan Sergio Reguilón; he ended the campaign as a Europa League winner again, unused in the final defeat of Inter Milan.