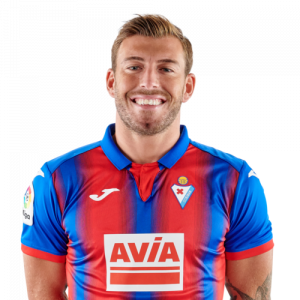 Sergi Enrich Ametller (born 26 February 1990) is a Spanish professional footballer who plays for SD Eibar as a forward.

Enrich was born in Ciutadella de Menorca, Menorca, Balearic Islands. A product of RCD Mallorca’s youth ranks, he made his first-team – and La Liga – debut on 24 January 2010, playing the last 22 minutes in a 1–1 away draw against RCD Espanyol after coming on as a substitute for Fernando Varela. He spent the vast majority of his first professional season with the reserve team, in the third division.

Enrich spent the 2011–12 campaign on loan to Recreativo de Huelva, in the second level. The following year, he moved to AD Alcorcón on the same basis.

In the summer of 2013, Enrich signed a two-year contract with CD Numancia still in the second tier. On 20 December of the following year, he contributed a brace to a 6–6 home draw against CD Lugo.

On 12 July 2015, Enrich moved to SD Eibar in the top division after agreeing to a two-year deal. He scored 11 goals during his second season, helping to a tenth-place finish.

Enrich remained at the Basque club in the ensuing seasons, signing new contracts in February 2017 and May 2019, tying him to them until June 2022.