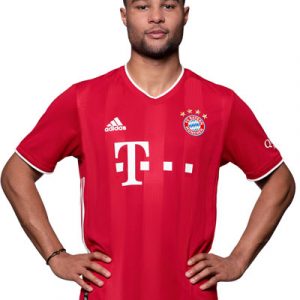 Serge David Gnabry (born 14 July 1995) is a German professional footballer who plays as a winger for Bundesliga club Bayern Munich and the Germany national team.

Gnabry started his career in England with Arsenal in the Premier League, making his professional debut in September 2012. He also had a brief spell on loan with West Bromwich Albion before moving back to Germany to join Werder Bremen in 2016. In 2017, he signed for Bayern Munich before being loaned to 1899 Hoffenheim for the 2017–18 season. In 2018–19, his first season with Bayern Munich, he won the Bundesliga title and was named their Player of the Season. The following season, Gnabry scored 23 goals as Bayern sealed a continental treble consisting of the Bundesliga, DFB-Pokal and UEFA Champions League.

After appearing for Germany at various youth levels, Gnabry made his senior international debut in November 2016 in a 2018 FIFA World Cup qualification match against San Marino. He scored a hat-trick in the 8–0 win.

Gnabry started the 2020–21 season by acquiring the No. 7 shirt, after Franck Ribéry who had worn it for eleven years. In the first match of the season, Gnabry scored a hat-trick in an 8–0 win over Schalke, to be his first ever Bundesliga hat-trick.