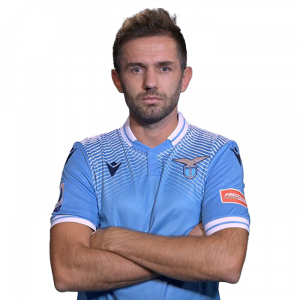 Senad Lulić (born 18 January 1986) is a Bosnian professional footballer who plays as a midfielder and captains Serie A club Lazio.

Lulić started his professional career at Chur 97, before joining Bellinzona in 2006. Two years later, he moved to Grasshopper. In 2010, he was transferred to Young Boys. The following year, he moved to Lazio, for whom he scored the winning goal in 2013 Coppa Italia Final against city rivals Roma.

Lulić made his senior international debut for Bosnia and Herzegovina in 2008, earning over 50 caps and scoring 4 goals until 2017. He represented the nation at their first major tournament, the 2014 FIFA World Cup.

On 16 June 2011, Lulić was transferred to Italian team Lazio for an undisclosed fee. He made his competitive debut for the club on 18 August against Rabotnički in 1st leg of UEFA Europa League play-offs. Three weeks later, he made his league debut in an away draw at Milan. On 23 October, he scored his first goal for Lazio. Following his debut season, in June 2012, Lulić was voted third as Bosnia and Herzegovina’s player of the year, behind Edin Džeko and Miralem Pjanić.

Lulić won his first trophy with the club on 26 May 2013, by beating city rivals Roma in Coppa Italia final. He scored the only goal of the game in 71st minute.

On 28 November, he played his 100th game for the side in a comfortable victory over Legia Warsaw.

On his 30th birthday, he extended his contract until June 2021.

Lulić played his 200th game for Lazio against Bologna on 16 October.

He was accused of racially insulting Antonio Rüdiger after a loss against city rivals Roma in December. After being found guilty of these allegations, he was suspended for 20 days and fined €10,000.

In July 2017, after departure of Lucas Biglia, Lulić was named team captain. He won his first trophy as captain on 13 August, by triumphing over Juventus in 2017 Supercoppa Italiana.

In a game against Apollon Limassol on 29 November 2018, Lulić entered Lazio’s top 10 appearance makers ever, as he played his 294th game for the club. A few weeks later, he scored a goal in his 300th game for the team.