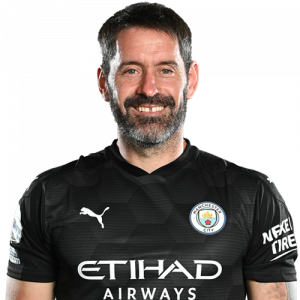 Scott Paul Carson (born 3 September 1985) is an English professional footballer who plays as a goalkeeper for Premier League club Manchester City, on loan from Derby County.

Carson joined the Leeds United football academy in 2002, making his full first-team debut for Leeds against Manchester United in February 2004. In January 2005, he moved to Liverpool for a £750,000 fee and was called up for the England senior team later that year. He made nine appearances for Liverpool, including the UEFA Champions League quarter-final victory over Juventus in April 2005, before going on loan to Sheffield Wednesday, Charlton Athletic and Aston Villa in successive seasons to gain experience. After his return to Liverpool from his loan spell at Aston Villa at the end of the 2007–08 season, he joined West Bromwich Albion for a £3.25 million fee in July 2008. In 2011, he moved to Bursaspor of Turkey. After two years in Turkey, he moved back to England with Wigan Athletic, where he remained until 2015 when he signed for Derby County. Carson joined reigning Premier League champions Manchester City on loan in August 2019 to provide cover for Ederson and Claudio Bravo.