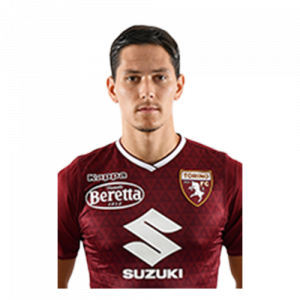 Saša Lukić (born 13 August 1996) is a Serbian professional footballer who plays as a midfielder for Italian club Torino and the Serbia national team.

Partizan
Saša Lukić started playing football at POFK Savacium, a football school in Šabac, before joining Partizan as a trainee in August 2009. He signed his first professional contract for the club in August 2013 on his 17th birthday, signing a three-year deal.

Loan to Teleoptik
In order to gain senior experience, Lukić was immediately loaned to Teleoptik. He played regularly for the Opticians in the 2013–14 season, making 23 league appearances and scoring three goals, as the club failed to avoid relegation.

Return to Partizan
On 16 May 2015, Lukić made his competitive debut for Partizan and played the full match in a 1–1 home league draw with Novi Pazar. On 17 July 2015, he entered in the game against Metalac, replacing Stefan Babović in first game of 2015–16 Serbian SuperLiga. On 8 August, he scored his first official goal for Partizan in the final minutes of a 2–1 home win over Spartak Subotica. Two weeks later, he scored his second goal for Partizan in 1–3 away league win over Borac Čačak. On 26 August 2015, Lukić made his debut in the UEFA Champions League in the second leg of the play-off round against BATE Borisov. On 22 October, he played his first match in UEFA Europa League group stage against Athletic Bilbao. In the absence of some players he captained the team for several games.

Torino
On 29 July 2016, Lukić was signed by Italian club Torino. On 17 October, he made his debut in Serie A in a 4–1 win away to Palermo, replacing Mirko Valdifiori.