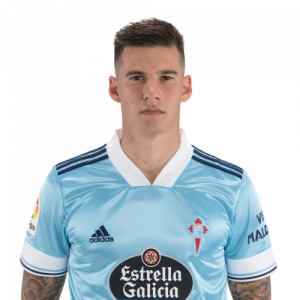 He began his career at Celta, scoring 12 goals in 56 games across three seasons before a €10 million move to Valencia in 2015. Four years later, he returned to Celta.

Celta
Born in Vigo, Galicia, Mina played youth football with hometown’s RC Celta de Vigo, and made his senior debut with the reserves in the 2012–13 season, in Tercera División. On 5 January he signed a professional deal with the club, running until 2018.

Mina made his first-team – and La Liga – debut for them on 16 February 2013, coming on as a substitute for Iago Aspas in the 66th minute of a 1–3 away defeat against Getafe CF. He scored his first top-flight goal on 16 September, but in a 3–2 loss at Athletic Bilbao; at only 17 years, 9 months and 10 days, he became the side’s youngest goalscorer in the first division.

On 11 April 2015, Mina scored four goals in a 6–1 home rout of Rayo Vallecano, becoming the youngest player ever to do so in the Spanish top tier and the first from Celta since 1979.

Valencia
On 4 July 2015, Mina moved to fellow league team Valencia CF after agreeing to a six-year deal for a €10 million fee. He scored his first competitive goal for them on 5 December, netting four minutes from time in a 1–1 home draw against FC Barcelona.

On 18 February 2016, in only the first 45 minutes, Mina scored twice and provided three assists in a UEFA Europa League last-32 tie against SK Rapid Wien, in an eventual 6–0 win also at the Mestalla Stadium (the half-time result was a competition record).

Mina scored a career-best 12 league goals in 2017–18 as Valencia came fourth, despite being more often than not a substitute for Simone Zaza and Rodrigo; halfway through the campaign, the trio had 12 more goals than Real Madrid’s “BBC” attacking line. The following season, he netted braces in Copa del Rey victories over CD Ebro (round of 32) and Sporting de Gijón (last 16) as his club picked up their first honour for 11 years, being unused in the 2–1 final defeat of Barcelona on 25 May 2019.

Return to Celta
After four years at the Mestalla Stadium, Mina returned to Celta on a five-year contract as Maxi Gómez moved in the opposite direction. In 2020–21, he scored 12 goals in partnership with Aspas’ 14;[ this included both goals of a 2–1 win at Barcelona on 16 May to end that team’s title hopes.