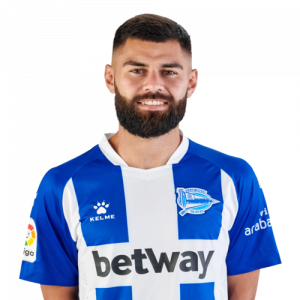 Rubén Duarte Sánchez (born 18 October 1995) is a Spanish professional footballer who plays for Deportivo Alavés. Mainly a left back, he can also play as a central defender.

Born in Almería, Andalusia, Duarte joined RCD Espanyol’s youth system in 2009, aged 13, after spells at Los Molinos CF and Polideportivo Ejido. In 2012, he was linked to Manchester City, and made his senior debuts with the reserves in Segunda División B.

On 7 January 2015, Duarte made his first-team debut, playing the full 90 minutes in a 1–2 away loss against Valencia CF for the season’s Copa del Rey. His maiden La Liga appearance occurred on 8 February, against the same opponent and with the same scoreline, but at the Estadi Cornellà-El Prat.

Duarte renewed his contract with the Catalans on 11 June 2015, signing until 2019 and being definitely promoted to the main squad. On 29 May 2017, after falling down the pecking order, he agreed to a three-year deal at fellow league club Deportivo Alavés.