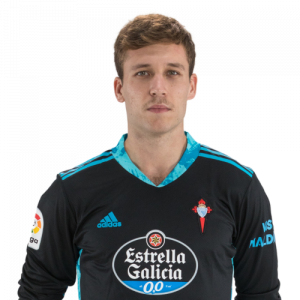 Rubén Blanco Veiga (born 25 July 1995) is a Spanish professional footballer who plays for RC Celta de Vigo as a goalkeeper.

He made his professional debut for Celta in La Liga at the age of 17, and went on to play over 100 games for the club.

Born in Mos, Province of Pontevedra, Galicia, Blanco finished his formation with local RC Celta de Vigo. He played his first games as a senior at only 16, with the B team in Segunda División B.

On 26 May 2013, two months shy of his 18th birthday, Blanco made his main squad – and La Liga – debut, entering the pitch at half-time after Javi Varas suffered a serious shoulder injury and keeping a clean sheet in a 2–0 away win against Real Valladolid. He retained his position for the following match, the last of the campaign, helping to a 1–0 home victory over RCD Espanyol as Celta managed to stay up, being the first team above the relegation zone.

Blanco made eight Copa del Rey appearances in 2015–16 as Celta made the semi-finals before a 6–2 aggregate loss to Sevilla FC. On the league front, he played as many matches as back-up to Sergio Álvarez. On 3 January 2016, he received a straight red card for a foul on Nordin Amrabat in a 2–0 loss at Málaga CF.

In 2016–17, Blanco made his continental debut as the side reached the UEFA Europa League semi-finals. He played four group games, beginning with the 2–2 draw against AFC Ajax at Balaídos on 20 October. After five appearances of the next season’s domestic season, he succeeded Álvarez as starting goalkeeper under manager Juan Carlos Unzué. He was sent off on 16 October 2017 for taking down Jonathan Calleri in a 5–2 away win over UD Las Palmas.