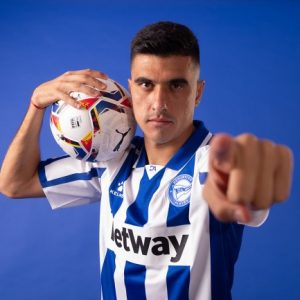 Rodrigo Andrés Battaglia (born 12 July 1991) is an Argentine professional footballer who plays as a midfielder for Alavés on loan from Sporting CP.

Battaglia spent time in the youth divisions of Vélez Sársfield and Almagro before joining Huracán. He made his professional debut aged 19 as a substitute in a 3–0 away defeat to Racing Club in the Primera División on 2 October 2010. His first goal for the club came on 26 March 2011 in a 2–0 win against Gimnasia y Esgrima de La Plata.

In January 2014, Battaglia joined S.C. Braga in Portugal, playing 26 games for the club with loan spells in the middle at fellow Primeira Liga sides Moreirense and Chaves, and at his homeland club Rosario Central.

On 15 May 2018, Battaglia and several of his teammates, including coaches, were injured following an attack by around 50 supporters of Sporting at the club’s training ground after the team finished third in the league and missed out on the UEFA Champions League qualification. Despite the attack, he and the rest of the team agreed to play in the Portuguese Cup final scheduled for the following weekend, which they lost to C.D. Aves.