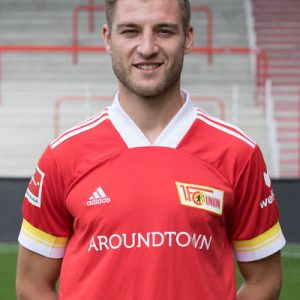 Robin Knoche (born 22 May 1992) is a German professional footballer who plays as a centre back for Union Berlin. Knoche represented Germany youth teams from 2012 to 2015.

Wolfsburg
Knoche is a product of VfL Wolfsburg’s youth academy, first entering the club at the age of thirteen. Knoche made his senior first team debut in 2011 and was part of the squad that won the 2015 DFB-Pokal Final against Borussia Dortmund and the 2015 DFL-Supercup against Bayern Munich.

Union Berlin
On 4 August 2020, Knoche signed for Union Berlin after his Wolfsburg contract expired at the end of the season.