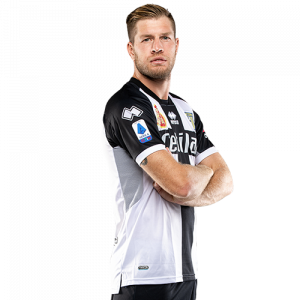 Riccardo Gagliolo (born 28 April 1990) is a professional footballer who plays as a left back for Serie B club Parma. Born in Italy to an Italian father and a Swedish mother, he has decided to represent Sweden on the international level.

Personal life
Riccardo Gagliolo was born in Imperia, Italy to an Italian father and a Swedish mother.

Club career
Gagliolo made his senior debuts with Andora Calcio in the Eccellenza Liguria. In summer 2010, he joined Sanremese. In November 2011, he moved to Pro Imperia in Serie D.

On 24 August 2013, Gagliolo made his Serie B debut, starting in a 0–1 loss at Ternana; he scored his first goal on 29 December, the only goal of the game in a home win over Juve Stabia.

International career
Gagliolo’s mother is Swedish. He has a Swedish passport and has expressed a wish to play for the Sweden national team, specifically with Zlatan Ibrahimović. On 2 October 2019, Gagliolo was called up to Sweden’s UEFA Euro 2020 qualifying games against Malta and Spain. Gagliolo made his international debut starting and playing the full game for Sweden in a 3–0 win against the Faroe Islands in the last game of the Euro 2020 qualifying stage.