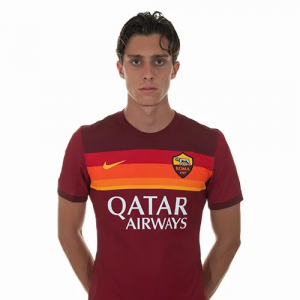 Riccardo Calafiori (born 19 May 2002) is an Italian professional footballer who plays for Roma as a left-back.

Club career
A youth product of Roma, Calafiori signed his first contract with them on 16 June 2018. Calafiori suffered a near career-ending injury to his knee on 2 October 2018. Calafiori made his professional debut with Roma, as well as his Serie A debut, in a 3–1 away win over Juventus on 1 August 2020; during the match, he won a penalty, which was successfully converted by teammate Diego Perotti, and he also scored a goal with a strike from distance following a corner, which was disallowed however, as the ball had previously gone out of play.

The following season, on 3 December 2020, Calafiori was brought on by Roma coach Paulo Fonseca as Leonardo Spinazzola’s substitute, and scored his first professional goal in Roma’s home win against Young Boys in the UEFA Europa League.