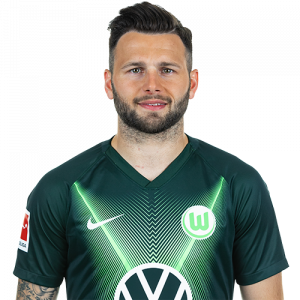 Renato Steffen (born 3 November 1991) is a Swiss professional footballer who currently plays for VfL Wolfsburg in the Bundesliga. He is a left-footed winger.

Youth football
Steffen played his youth football with local club FC Erlinsbach. He played three years in the Aarau U-14 and U-16 youth teams. He then transferred to SC Schöftland and spent another four years with them.

Solothurn and Thun
Steffen played amateur football in the 1. Liga Classic for Solothurn. After one season he transferred to Thun in July 2012 and made his professional debut on 2 September 2012 in the game against Servette FC. He scored 4 goals in 19 games for Thun in the 2012–13 Swiss Super League that season.

Young Boys
At the end of that season Steffen was sold for €500.000 to Young Boys. Here he signed a four-year deal in Bern.

Basel
During the 2015–16 Super League winter break, on 12 January, Basel announced that Steffen had signed a four-and-a-half-year contract with them. Steffen played his first team league debut for Basel on 7 February, coming in as a substitute in the 74 minute, in the home game against Luzern. He scored his first goal for his new club, the final goal of that match in the 85 minute and Basel won the game 3–0. Under trainer Urs Fischer Steffen won the Swiss Super League championship at the end of the season and at the end of the 2016–17 Super League season. For the club this was the eighth title in a row and their 20th championship title in total. They also won the Swiss Cup for the twelfth time, which meant they had won the double for the sixth time in the club’s history.

Wolfsburg
On 10 January 2018, Steffen signed a three and a half year deal with Wolfsburg. The transfer fee was reported as being 1.75 million euro. He scored the first Wolfsburg goal after the temporary cancellation of the Bundesliga because of the COVID-19 pandemic in Germany, against Augsburg with a header from the edge of the box.