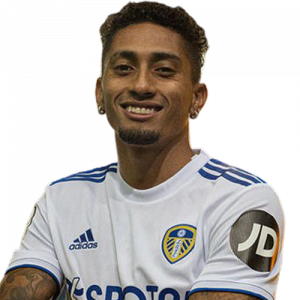 Avai
Raphinha started his career at Brazilian football side Avaí of the Campeonato Brasileiro Série A in 2014.

Sporting CP
In May 2018, he transferred to Portuguese club Sporting CP until 2022. He made his debut on the 12 August against Moreirense. He scored his first goal for the club on the 20 September 2018 against FK Qarabag in the 2–0 victory in the 2018–19 UEFA Europa League. Raphinha was part of the side who won the 2018–19 Taça da Liga, Raphinha also won the 2018–19 Taça de Portugal scoring a penalty in the penalty shootout victory against Porto.

Rennes
He signed for French club Rennes in 2019, with a transfer fee around €21 million, the club’s record signing. He scored and gained an assist in his final game for the club during the 2020–21 Ligue 1 fixture against Reims in a 2–2 draw on 4 October 2020. He scored eight goals and gained seven assists during his time at the club, where he helped Rennes to a third place finish and qualify for the 2020–21 UEFA Champions League during the 2019–20 Ligue 1 season.

Leeds United
On 5 October 2020, he joined Leeds United on a four-year contract for an undisclosed fee reported to be in the region of £17 million, or about €20 million. On 19 October 2020, he made his debut as a second-half substitute in a 1–0 loss to Wolverhampton Wanderers. His full debut was at home to Arsenal on 22 November 2020. On 28 November 2020, Raphinha scored his first Leeds goal in a 1–0 away win over Everton. His winning goal secured Leeds’ first ever Premier League win at Goodison Park and their first league win at Everton since 1990.