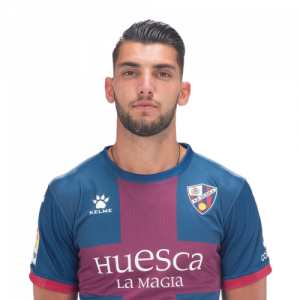 Rafael “Rafa” Mir Vicente (born 18 June 1997) is a Spanish professional footballer who plays as a forward for Huesca, on loan from English club Wolverhampton Wanderers.

Mir’s 32 goals at La Masia earned him a return to his native region and Real Murcia, where a 45-goal haul led to the attention of Valencia CF. He made his senior debut for the reserves on 1 March 2015, as an 88th-minute substitute for Wilfried Zahibo in a 2–1 Segunda División B loss at CE L’Hospitalet.

Mir scored his first senior goal on 7 March 2015, netting the last in a 2–0 win over CF Badalona at the Ciudad Deportiva de Paterna. He finished the campaign with four appearances, as his side narrowly avoided relegation.

The following season, Mir excelled in the UEFA Youth League, scoring consecutive braces in victories over Gent. On 14 November 2015, he was given his first start for the B-side, playing the full 90 minutes in a 4–2 loss at another reserve team, Villarreal CF B.

Wolverhampton Wanderers
On 3 January 2018, Mir joined Championship club Wolverhampton Wanderers for an undisclosed fee, signing a four-and-a-half-year contract with the club and taking the number 9 shirt. He linked up with former Valencia boss Nuno Espírito Santo, who gave him his first team debut at the club. He made his debut three days later in the FA Cup third round at home to Swansea City, playing the last 13 minutes of a goalless draw in place of Leo Bonatini.

On 23 July 2018, Mir joined Segunda División side UD Las Palmas on loan for one season. A year later, he returned to the Championship, on loan to Nottingham Forest. After struggling for both minutes and goals with Forest, Mir and Forest agreed for him to return to his parent club on 14 January 2020.

Immediately following his departure from Nottingham, Mir was loaned to Segunda División side SD Huesca for 18 months. He was sent off on 8 February in a 1–0 loss at Girona FC for elbowing Álex Granell and banned for one match. On 17 July, he scored twice in a 3–0 home win over CD Numancia to win promotion to the top flight with a game remaining. The following 29 January, he scored a hat-trick in a 3–1 victory at Real Valladolid.