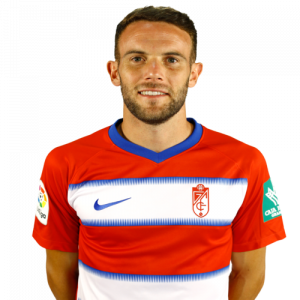 Joaquín José Marín Ruiz (born 24 September 1989), commonly known as Quini, is a Spanish professional footballer who plays for Granada CF as a right back or right winger.

Born in Fernán Núñez, Córdoba, Quini spent his first years as a senior competing in amateur football, as a striker. In the 2011–12 season he made his debut as a professional, appearing and scoring regularly for local Lucena CF in Segunda División B, now playing as a winger.

Quini joined Real Madrid Castilla of the Segunda División on 12 June 2012, penning a two-year contract. He made his league debut on 25 August, playing ten minutes in a 3–2 home win against FC Barcelona B. He was also successfully reconverted as right back by manager Manolo Díaz during the 2013–14 campaign.

On 11 June 2014, Quini signed a three-year deal with La Liga club Rayo Vallecano. He played his first match in the Spanish top flight on 25 August, featuring the full 90 minutes in a 0–0 home draw against Atlético Madrid.

Quini joined Granada CF for three seasons on 28 June 2017, after his contract expired. He contributed 31 appearances and one goal in his second, in a return to the top tier as runners-up.

Quini spent the vast majority of 2019–20 on the sidelines, due to a knee injury.