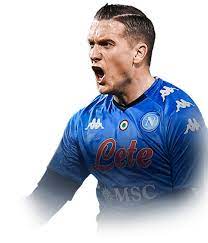 Piotr Sebastian Zieliński (born 20 May 1994) is a Polish professional footballer who plays as a midfielder for Italian club Napoli and the Poland national team.

During his football career he played for clubs including Zagłębie Lubin, Udinese, and Empoli.

Zieliński was selected to represent Poland at UEFA Euro 2016 in France as well as the 2018 FIFA World Cup in Russia. He has two brothers who are also professional footballers – Paweł and Tomasz Zieliński.

Early career
Zieliński started his career at his local club, Orzeł Ząbkowice Śląskie, where he was coached by his father. At the age of 14, he joined Zagłębie Lubin, even though he was wanted by Bayer Leverkusen and Liverpool and also had trials at Feyenoord and Hereenveen. He rose through the ranks and started training with the first team at the age of 15, under Franciszek Smuda.

At 17 he moved abroad to join Udinese Calcio after they scouted him on international youth tournament.

Udinese
He made his debut in Serie A on 2 November 2012 when he replaced Antonio Di Natale in 91st minute of a match against Cagliari.

Napoli
On 4 August 2016, after months of transfer speculation, Zieliński moved from Udinese to Napoli for a reported €16 million. He scored his first goal with Partenopei’s shirt on 3 December, in a 3–0 home win against Inter Milan; he ended his first season with six goals. On 31 August 2020 he signed new contract with Napoli until 2024.