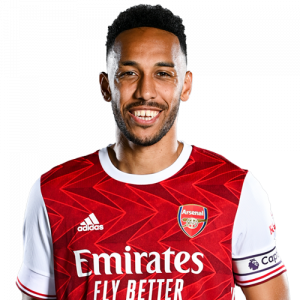 Pierre-Emerick Emiliano François Aubameyang (born 18 June 1989) is a professional footballer who plays as a forward and is the captain of both Premier League club Arsenal and the Gabon national team. Aubameyang is renowned for his pace, finishing, and off-ball movement.

The son of former Gabonese international Pierre Aubameyang, Aubameyang began his senior club career playing for Italian club A.C. Milan, but never appeared for the club as he went on a series of loan spells in France. He moved to Saint-Étienne in 2011. There, he won a Coupe de la Ligue title and joined Borussia Dortmund in 2013. In Germany, Aubameyang finished as the league’s top goalscorer in the 2016–17 season and won a DFB-Pokal. He also ranks as the club’s sixth highest all-time goalscorer. In 2018, Aubameyang was the subject of a club record association football transfer when signed for Arsenal in a transfer worth £56 million (€60 million), making him the most expensive Gabonese player of all time. With Arsenal, Aubameyang won a FA Cup and finished as the league’s joint-top goalscorer in the 2018–19 season.

Aubameyang ranks as Gabon’s all-time top goalscorer. He made his senior debut for the national team in 2009 aged 19, and appeared in three Africa Cup of Nations tournaments, as well as the 2012 Summer Olympics. For his performances at the 2015 Africa Cup of Nations, Aubameyang was named African Footballer of the Year, becoming the first Gabonese player, and second-European born player, to win the award.