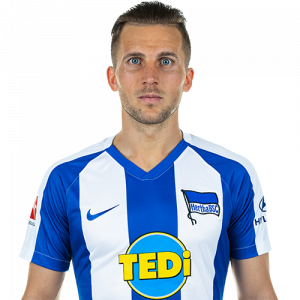 Peter Pekarík (born 30 October 1986) is a Slovak football defender who plays for Hertha BSC and the Slovakia national team.

Žilina
Pekarík, born in Žilina, began playing football at the youth section of his local club. His Corgoň Liga debut came for ZŤS Dubnica. In his first season, he played 27 matches and came back to MŠK Žilina in the summer of 2005. He won the Corgoň Liga in the 2006–07 season, playing 35 matches.

Wolfsburg
He impressed with great performances in the first half of the 2008–09 season and signed a four-and-a-half-year contract for German side VfL Wolfsburg in January 2009.

On 31 January 2009, matchday 18, he debuted in the Bundesliga in a 1–1 draw against the 1. FC Köln. At half time, coach Felix Magath substituted him for Cristian Zaccardo. Except for one game, he played in the second half of the season in all games and won with Wolfsburg for the first time in club history the German championship. However, at the end of the season he was substituted more often and lost his place in the starting eleven.

Kayserispor
In August 2011, Pekarík joined Turkish first division side Kayserispor for the 2011–12 season on loan.

Hertha BSC
After a year in Turkey, Pekarík returned to Germany, signing for Hertha BSC.

On 31 March 2017, in his eighth season in Germany, Pekarík scored his first Bundesliga goal in a 1–3 loss against Hoffenheim. At the moment it was his 151st Bundesliga match.