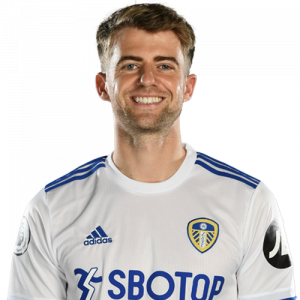 Patrick James Bamford (born 5 September 1993) is an English professional footballer who plays for Premier League club Leeds United. Primarily a forward, he can also play in an attacking midfield role.

Bamford began his career at Nottingham Forest, making his debut on 31 December 2011, at the age of 18. A month later he joined Chelsea for a fee of £1.5 million. He was loaned out to Milton Keynes Dons, Derby County, and Middlesbrough, winning the Championship Player of the Year for the 2014–15 season. Bamford then had further loans at Premier League clubs Crystal Palace, Norwich City and Burnley, but saw limited playing time.

After five years at the club without making a first-team appearance, Bamford left Chelsea and returned to Middlesbrough for a fee in the region of £5.5 million in January 2017. He subsequently joined Leeds United on 31 July 2018 for a fee possibly rising to £10 million, and helped the club win the EFL Championship during the 2019–20 campaign and gain promotion to the Premier League under the management of Marcelo Bielsa.

Bamford started the first three Premier League fixtures of Leeds United’s campaign, scoring in each game: against Liverpool (netting the second goal in a 4–3 away defeat), against Fulham, in a 4–3 home win and, with a late header at Bramall Lane, in a 1–0 win over Sheffield United. On 2 October 2020, Bamford was nominated for Premier League Player of the Month for the three goals and one assist he had in September but lost out to Everton’s Dominic Calvert-Lewin.

In Leeds’ second game back after the international break, Bamford scored his first Premier League hat trick, in a 3–0 away win on 23 October over Aston Villa. He was the winner of the Professional Footballers’ Association Fans’ Bristol Street Motors Premier League Player of the Month for September and October. He scored his 100th professional goal on 8 February 2021, scoring the second goal in Leeds’ 2–0 defeat of Crystal Palace.