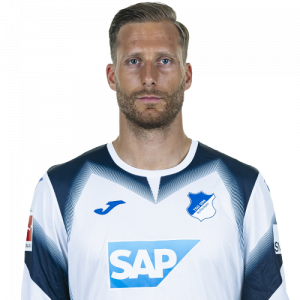 Oliver Baumann (born 2 June 1990) is a German footballer who plays as a goalkeeper for 1899 Hoffenheim in the Bundesliga.

First team
On the last day of the 2009–10 Bundesliga season, Baumann made his senior team debut in a 3–1 home victory over Borussia Dortmund. He became the SC Freiburg first-choice goalkeeper from the 2010–11 season onwards, where he made 30 appearances in the Bundesliga. In June 2011, he extended his contract until 2015. In the following two seasons, 2011–12 and 2012–13, Baumann made a total of 73 appearances for the Freiburg first-team, 67 of those in the league.

In the 2013–14 season he continued to be the mainstay of the Freiburg line-up, starting all of the club’s first six Bundesliga fixtures, as well as starting Freiburg’s opening UEFA Europa League and DFB-Pokal matches. In a match against Hamburg SV, Baumann made three crucial errors that led to a 3–0 loss to Hamburger SV. Despite his poor performance, he started the following game against Nürnberg and kept a clean sheet to help Freiburg achieve its first win of the season. On 24 September 2013, Baumann signed a new contract at the club.