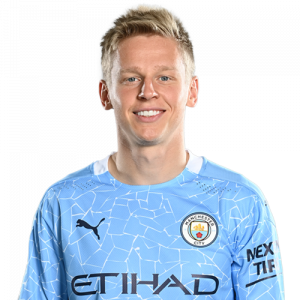 Oleksandr Volodymyrovych Zinchenko (born 15 December 1996) is a Ukrainian professional footballer who plays for Premier League club Manchester City and the Ukraine national team. Zinchenko began his career at Russian Premier League team FC Ufa before joining Manchester City in 2016 for a fee in the region of £1 million. A versatile midfielder, he can also operate in many positions on the left side, such as a wing back or a full-back.

Zinchenko playing for Ufa in 2015
Zinchenko is a product of Youth Sporitve School Karpatiya of his native Radomyshl (with first coach Serhiy Boretskyi), FC Monolit Illichivsk and FC Shakhtar Donetsk.

He made his Russian Premier League debut for Ufa on 20 March 2015 in a match against FC Krasnodar.

Manchester City
On 4 July 2016, Zinchenko signed for Premier League club Manchester City for an undisclosed fee believed to be around £1.7 million. The move surprised some. However, he was described by a Russian football scout as a “real talent”, with Bundesliga club Borussia Dortmund also monitoring him.

Zinchenko was loaned to Eredivisie club PSV Eindhoven on 26 August, for the 2016–17 season. He made his debut on 1 October, as a substitute in a 1–1 draw against SC Heerenveen.

Zinchenko returned to Manchester City for the 2017–18 season, and made his debut on 24 October 2017, playing the full match including extra time in a 0–0 draw with Wolverhampton Wanderers in the EFL Cup. He made his first Premier League appearance on 13 December 2017, coming off the bench in a 4–0 away win at Swansea City.

On 18 December 2017, Zinchenko scored the winning penalty kick against Leicester City after a 1-1 stalemate in regulation time, sending Manchester City through to the semi-finals of the EFL Cup.

Zinchenko gained an extended run in the side following injuries to left backs Benjamin Mendy and Fabian Delph, putting in a number of consistent performances in the position.

Zinchenko made his first appearance of the 2018–19 season in a 3–0 away win at Oxford United in the EFL Cup. In the same week, he made his first league start of the season in a 2–0 home win against Brighton & Hove Albion, due to injuries to Mendy and Delph.

Zinchenko scored his first goal for Manchester City in the EFL Cup semi-final against Burton Albion on 9 January 2019, a 9–0 home win.

In June 2019 he signed a new contract with the club, to keep him with them until 2024. On 25 October 2019, Zinchenko had a knee surgery in Barcelona.Manchester City coach Pep Guardiola told that the recovery from the injury would take from 5 to 6 weeks: “He had a contact with a knee. He felt something in the bone and had to stop. He had something to clean up the knee. It was not a big issue. Five or six weeks.”In the beginning of December 2019 Zinchenko returned to full training. On 11 December 2019 he played his first game after the injury against Dinamo Zagreb.