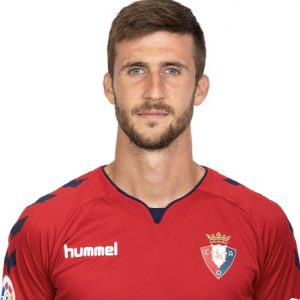 Oier Sanjurjo Maté (born 25 May 1986), known simply as Oier, is a Spanish professional footballer who plays for and captains CA Osasuna as a defender or a defensive midfielder.

He spent the vast majority of his career with Osasuna, making over 300 appearances.

Oier was born in Estella-Lizarra, Navarre. A product of hometown CD Izarra’s youth academy, he completed his development at neighbouring club CA Osasuna. He made his La Liga debut on 24 September 2008 in a game against Deportivo de La Coruña, coming on for Nacho Monreal in the tenth minute of an eventual 0–0 home draw. Although he spent most of the season with the reserves, he still managed a further nine league appearances.

In his first full professional campaign, Oier started the first five matches at right back as starter César Azpilicueta was away on international duty. He found his chances limited after the latter’s return, and was subsequently loaned to RC Celta de Vigo on 11 July 2011.

After being a starter for the Galicians as the season ended in promotion, Oier returned to Osasuna and renewed his contract until 2015. He scored two goals from 28 appearances in 2012–13, but the team returned to Segunda División after a 14-year stay.

Oier extended his contract for three years in June 2015, and in December 2018 this was lengthened to 2020 with a buyout clause of €8 million while the side remained in the second tier. He finished that season as captain of the champions.

After returning to the top flight, Oier earned two new renewals, allowing him to skipper the club during its centenary in 2020. On 31 October that year, in a 3–1 home loss to Atlético Madrid, he made his 300th official appearance for the team but also gave away a penalty by handball.