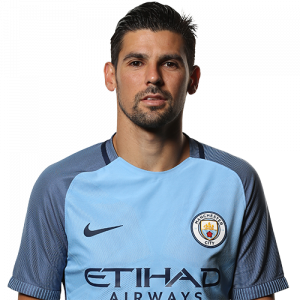 Manuel Agudo Durán (born 15 October 1986), known as Nolito, is a Spanish professional footballer who plays as a winger or a forward for RC Celta de Vigo and the Spain national team.

Having begun his career at lower league clubs he signed for Barcelona in 2008, playing predominantly with its reserves. He totalled over 160 games and 40 goals in La Liga, where he also represented Granada, Celta and Sevilla. Abroad, he played two seasons for Benfica in Portugal, and one in the English Premier League with Manchester City.

Nolito made his debut for Spain in November 2014, representing the nation at Euro 2016.

Barcelona
Born in Sanlúcar de Barrameda, Cádiz, Andalusia, Nolito arrived at Barcelona’s youth academy at nearly 22 years of age, having appeared with Écija in his native region in two Segunda División B seasons. With the Catalans, in the same tier, he scored 16 league goals over two seasons – 12 in the second– as the B team returned to the Segunda División after an 11-year absence.
In late May 2011, Nolito rejected Barcelona’s offer of a professional contract and instead signed a five-year deal with Portuguese club Benfica, effective as of 1 July. He scored on his official debut on the 27th, a 2–0 home win against Trabzonspor in the UEFA Champions League third qualifying round. He also netted in the second leg, a 1–1 draw.
Nolito signed with Celta de Vigo on 1 July 2013, penning a four-year deal and reuniting with former Barcelona B boss Luis Enrique. He finished his debut season as team top scorer, with 14.

On 1 July 2016, Nolito signed with Premier League side Manchester City on a four-year deal for a fee of £13.8 million. He made his debut on 13 August, playing 59 minutes in a 2–1 home victory against Sunderland. Three days later he scored his first goal, and also provided an assist to Sergio Agüero in a 5–0 away rout of Steaua București in the Champions League play-off round.

Nolito made a few appearances during his time in Manchester, but he and his family were unsettled by life in England.

Sevilla
In July 2017, Sevilla signed Nolito on a three-year contract. He spent the better part of the 2018–19 season on the sidelines, nursing a fibula injury.

Return to Celta
On 18 June 2020, Nolito rejoined Celta on a reported one-year deal. His Sevilla contract was set to expire at the end of the month, and the former were granted an emergency exception to acquire him outside of the transfer window because of a long-term injury to goalkeeper Sergio Álvarez. Three days later, in his first game back, he came off the bench to assist Santi Mina and score a penalty in a 6–0 home thrashing of Alavés.