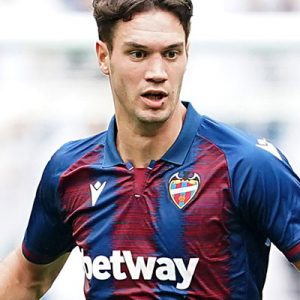 Nikola Vukčević (born 13 December 1991), also known as Điđo, is a footballer who plays as a defensive midfielder for La Liga side Levante.

ukčević began his professional career with Budućnost. He debuted for the Montenegro national team in 2014.

Budućnost
From 2010 to 2013, Vukčević played for local club Budućnost, where he earned 65 caps and scored four goals. During the 2011–12 season, he emerged as one of the best youngsters in the country, and became Budućnost’s captain during their title run. In the following season, Vukčević became the most valuable player in Budućnost squad, starting in 27 out of 33 league matches – the most appearances he made during one season at the time. His good performances earned him a starting spot in Montenegro’s U21 selection.

Braga
Vukčević left Budućnost as a free agent due to the expiration of his contract. In September 2013, he signed for Braga, and initially made appearances for their reserve team.

He made his debut for the club in a 3–0 win against Vitória S.C., coming on as a 91st-minute substitute for Felipe Pardo in the Minho derby. He became a regular substitute on Braga’s first squad and would occasionally start in matches of Taça de Portugal and Taça da Liga.

Levante
On 9 August 2018, Vukčević moved to Spanish club Levante for a €8.9 million fee and signed a four-year contract.