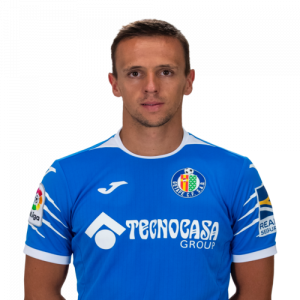 Nemanja Maksimović (born 26 January 1995) is a Serbian professional footballer who plays as a defensive midfielder for Spanish club Getafe CF and the Serbian national team.

Early career
Born in Banja Koviljača, Maksimović played for Red Star Belgrade’s youth selection teams up until the under-19 level, but eventually had his contract terminated. After his display at the 2013 UEFA U19 Championship, he signed with Slovenian side Domžale. He made his professional debut on 18 October 2013 in a 2–2 draw with Zavrč.

Valencia
On 2 July 2017, Valencia announced the signing of Maksimović on a contract until 2022. He made his debut for the club on 18 August, coming on as a late substitute for Carlos Soler in a 1–0 La Liga home win against UD Las Palmas.